This article looks at stock market returns by President over the past 90 years.

While the two leading parties have been in power for roughly equal amounts of time over this horizon, stock market performance has favored one party.

This result likely differs from expectations given a belief that one party is more pro-business.

Economic cycles likely still carry more weight than electoral cycles, and market corrections driven by politics may be an opportunity.

With the Democratic and Republican conventions occurring this week and next in front of the November election, some might wonder which political party has been better for stocks historically. In this article, we will look at historical returns for each president from their election day to the election or appointment of their successor. 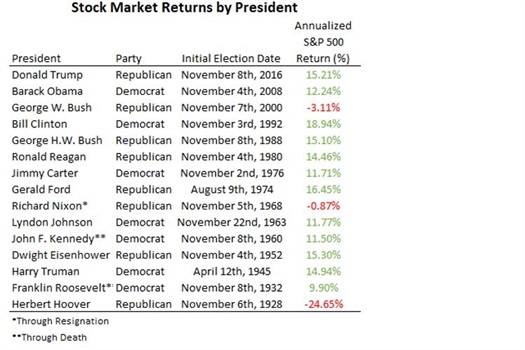 Stock Market Return by President To calculate returns, I used the S&P 500 (SPY), and its predecessor indices, for a dataset that dates back to 1927. This includes the full terms from Herbert Hoover all the way to the current returns of Trump's tenure. Returns to be discussed are annualized total returns, which includes price change plus the assumption that dividends were reinvested back into the index. 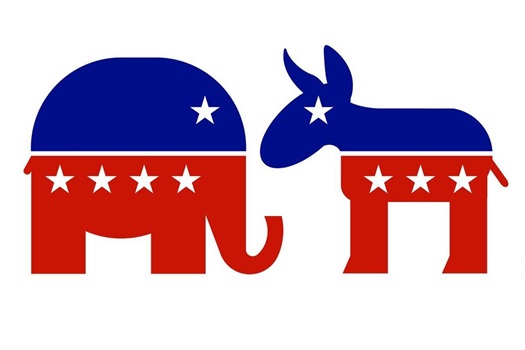 In the politically polarized world in which we live, the first question that readers might be wondering is what was the performance for Republicans versus Democrats?

The table below captures the annualized returns by political party using our same election day convention.

Stock market returns have been much higher under Democrats, perhaps bucking conventional wisdom that Republican administrations are better for business and markets. A dollar invested over just the 48 years that the Democrats controlled the White House grew to $352; a dollar invested in the roughly 44 years that Republicans controlled the White House grew to $9.

Looking at the first table, you can see that the only three presidents with negative returns for their tenure - George W. Bush, Richard Nixon, and Hebert Hoover - were all Republicans, which dragged down overall GOP returns. The Great Depression-era returns for Hoover were so negative that you might wonder if this experience dragged down the party's returns. Excluding Hoover, whose term history views unkindly, lifts average returns under Republicans to 8.8%.

While this is all an interesting exercise, economic cycles still likely matter much more to investors than electoral cycles. The last two Democratic presidents - Barack Obama and Bill Clinton - presided over two of the longest economic expansions in history. Clinton took over after the 1991 recession with modest valuations, and saw equity performance while in office that benefited from the expansion of the tech bubble. Obama took over amidst the Global Financial Crisis with low valuations and saw eight years of positive total returns during his administration. The winner of the 2020 election, while taking power during a different type of crisis, will not benefit from modest valuations with stocks again at all-time highs.

Some might even argue that Republican returns have been dragged down by negative performance at the end of terms (1991, 2008) when the market worried about a possible swing to the left if a Democrat won the election. Markets are forward-looking, and it is difficult to neatly fit in returns into an election cycle. In a lightly contested election, markets should already be pricing in an electoral outcome.

I have seen some commentary that has echoed these concerns and suggested that investors should fear a Democratic victory in the fall. History does not suggest those fears are well founded. No Democratic president has failed to deliver less than the 9.9% annualized return of FDR, who helped bring the country through Depression and World War II.

While every election is billed as critical, democracy, capitalism, and a balanced government have likely been a greater driver of strong investor returns in the United States. If markets convulse at either outcome in November, it is probably an opportunity.

Disclosure: I am/we are long SPY. I wrote this article myself, and it expresses my own opinions. I am not receiving compensation for it (other than from Seeking Alpha). I have no business relationship with any company whose stock is mentioned in this article.

Additional disclosure:
Disclaimer: My articles may contain statements and projections that are forward-looking in nature, and therefore inherently subject to numerous risks, uncertainties, and assumptions. While my articles focus on generating long-term risk-adjusted returns, investment decisions necessarily involve the risk of loss of principal. Individual investor circumstances vary significantly, and information gleaned from my articles should be applied to your own unique investment situation, objectives, risk tolerance, and investment horizon.